Sri Lanka’s imports raced to surpass the growth in merchandise exports during the month of June as the country struggles to bridge an ever-deepening hole in the trade account, intensifying the pressure mounting on the currency and foreign reserves. 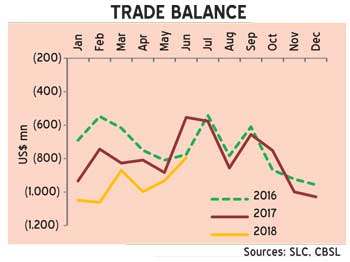 Sri Lanka reported US $ 795 million deficit in the trade account in June, expanding from US $ 554 million deficit a year ago, as Sri Lankans drove more vehicles on imported oil, which pushed up the import bill by 18.1 percent year-on-year (YoY) to US $ 1.8 billion in June.

Instead, the whole of Sri Lankan domestic manufacturing sector could send goods worth of US $ 1.0 billion abroad in the same month, up just 3.8 percent YoY.

The Central Bank said June’s trade deficit was the lowest recorded so far for this year.

The persistently higher deficits have accumulated into a US $ 5.7 billion hole in the trade account for the first six months of the year, up from US $ 4.8 billion trade deficit reported for the first half, last year.

The Central Bank said the Sri Lankan rupee has weakened by 5.0 percent during the year up to yesterday.

Meanwhile, the textiles and garments exports remained the only bright spot in Sri Lanka’s export basket, as it stood out with the highest earning of US $ 453.5 million for the month of June, rising by 13.9 percent YoY.

During the first six months, Sri Lanka exported US $ 2.5 billion worth of textile and garments, up 5.7 percent YoY.

This June, Sri Lanka marked the first anniversary of regaining the GSP Plus trade concessions, which allowed duty free entry to the European Union, mainly for garment exports.

The rubber product exports during June rose by 5.8 percent YoY to US $ 77.3 million, due to higher earnings from tyre exports.

The food, beverage and tobacco exports and transport equipment declined, while gems, diamonds and jewellery, machinery and mechanical appliances and petroleum product exports rose as the latter received the boost from the combined effect of higher export prices and volumes of bunker and aviation fuel.

The agricultural exports performed poorly as many categories of exports led by tea declined during the month, except for seafood, unmanufactured tobacco and rubber exports.

Tea, Sri Lanka’s largest agricultural export commodity, earned US $ 130 million from exports in June, down 6.5 percent YoY, due to the declines in both prices and volumes.

Meanwhile, fuel imports, which shot up by 71 percent YoY to US $ 343 million, weighed on Sri Lanka’s import expenditure. During the first six months, Sri Lanka expensed a whopping US $ 2.1 billion on fuel, up 29 percent YoY.

In response to the higher Value-Added Tax imposed on gold imports to curb illegal smuggling of gold into South India, gold imports plunged to just US $ 0.4 million from US $ 46 million a year ago.

However, during the first six months of the year, gold imports rose 59.2 percent YoY to US $ 438 million.

Similarly, to curb the strain on the currency caused by excessive personal vehicle imports, the Finance Ministry raised the excise duties on vehicles below the 1000cc engine capacity.

In June, Sri Lankan imported US $ 147 million worth of personal vehicles, up from US $ 54 million in the same month a year ago.

During the first six months, Sri Lankans have spent US $ 813 million for vehicles, up 120 percent YoY.
The new duty structure came into effect on August 1 and the Central Bank expects the vehicle imports to decelerate as a result.

The higher expenditure on transport equipment has been driven by the importation of four ships and road vehicles such as commercial cabs and auto trishaws, the Central Bank said.

Meanwhile, the food and beverage imports slightly came down in June in response to the eased consumption after the Central Bank raised interest rates.

The Central Bank said there is a reduction in the imports of seafood, rice and sugar.

The expanding deficit in the trade account adds to the worries of weakening rupee and foreign reserves ahead of a mountain of foreign currency debt, which is coming up for settlement during the next few years.